Never let off the gas

Last night I didn't sleep much.   Not cause I was nervous, but cause Cathi called me yesterday afternoon and said Max is probably not going to make it past the weekend.  He's been in the Doggie Hospital for 5 nights and his white blood cell count was 65,000 cells per microliter.  Normal for his size is around 17,000.  They were going to continue to monitor him and give him a super high nutritious fluid to increase his weight as well as some antibiotics.  Anyway I would wake up in the tent with Jonas, and cry to myself a little, and then fall
back asleep and a few hours later wake up and cry again.  I've never been so attached to an animal like this.

When the sun came up I got our suntent setup and took a water temp: 64°F?  The thermometer I bought was a cheap one from Smiths.  Piece of crap.  It definitely didn't feel like 64.  Met up with Josh, Kelsey, Wes, Brandon and myself with Jonas at Claim Jumper for dinner last night and it was fun visiting with everyone.

The water this morning was flat and clear.  I wanted to get around 40 minutes on each lap of 2,500 M.  With a total time around 2:45.  I found myself drafting off some fast people about 80% of the time.  Funny that one of them was Steve Pickard who I swim with at Steiner.  He's typically WAY faster than me and goes first in the lane, so I kept my pace count high and stayed on the feet of the faster

swimmers.  Bubbles were all I saw.  When I noticed the bubbles dwindle I'd look forward and see that they were pulling away and I'd sprint back up until I was right on their feet.  It was that strategy that made me do as well as I did.  I never once felt like I let off the gas.  Felt like a sprint the whole time.  I skipped taking a feed on the first lap.  I wanted a little bit of an edge on the leaders of the pack I was in. But by the time I was half a mile into the next lap, they were already passing me.  I started to cramp up pretty bad on that second lap, but I just kicked gently through it and it never returned completely. 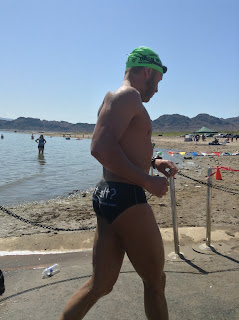 On the second lap I took the gatorade and drank it while jogging around the turn around point, then placed it back on the table.  Taking advantage of the movement while taking a drink.  On the final lap I kept dreaming of the massage I was going to get after the race.  I knew it would be good.  My shoulders were feeling it, but not so much that I slowed down or were in pain, but I knew that I was ripping them up real good.  One the last lap the field had spread out so much that I didn't have anyone to draft off.  I kept the strokes long with a good emphasis on a good catch and pull all they way through.

I kept my line straight to the turn buoys which gave me an advantage over some of the faster swimmers who were faster, but were all over the place and I was able to catch them at the last buoy turn, but after that they took off and I tried to draft, but was just a little too slow.  When I crossed the finish line, my watch read 2:36:46.  Nearly 10 minutes faster than my goal time.  They posted the results every 15 minutes, and it showed that I was in first place for my age group.  I went back about 10 minutes later and they had scribbled all over that page and put a new page up.  Ended up taking second behind Kevin Scott.  I mentioned to Josh that I was watching him on GTD cause he's up there on distance.  Then a lady who was right next to me said, "Hey! That's my husband."  I had her point him out to me and I went over to shake his hand and congratulate him.  He swam a 2:24.  Dang that's fast.  He's a tall guy which always helps in events like this. 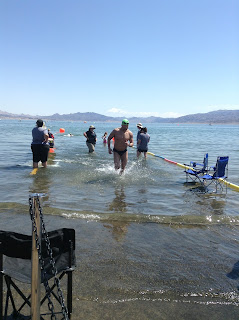 Overall I'm thrilled with my performance.  I made a deal with God, I said, "I'm not going to ask for help with my swim, but I am going to ask for help with Max.  I'll make a deal, if I can swim under 2:40 would you please provide a small doggie miracle and save his life?"  I know that's kinda dumb.  Cathi said I should have said, If I quit cussing, that would have been more appropriate.
But I knew that if I kept my effort at 100% I could do it, and I did.  When I got home Cathi had Max out of the hospital and had a full roast in the oven for him.  I enjoyed carving that entire thing into small bite sizes for him and enjoyed hand feeding him the entire thing.  He's doing very well, and isn't limping around anymore and he's gonna make it!  What a blessing.