On Friday evening I met Chad at the 155th Ave Station and went to his BnB he was renting for his family and spent the night.

At 5am we left in a Uber for the southern end of the island with his Mom, Diane.  We met up with Josh and got ready to go.  The field consisted of approximately 18 people, with about 4 waves of 4 people starting with the slowest swimmers first.

They started at Pier A, only a short distance further south than where I started my MIMS swim.  The weather was a little cloudy at the start, but after a couple hours it was all sun, and hot!  I did my swim mid June. Mid August is way hotter.  The water temp was in the mid 70's rather than the upper 60s and that's a big difference for someone swimming distance.

Chad swam primarily to the right and there were quite a bit of things to see on the left side. I hope he was able to enjoy as much as he could.  He ran hard into a toolbox that was floating. At the time Josh and I thought it was like a briefcase or something.

He passed up all the other swimmers in his group and those in the first wave.  Josh and I were unable to pace swim for him until the upper Harlem, or Hudson. We both agreed to wait until Hudson, because we could only swim for an hour total. So when we got to the Hudson he swam the first 30 minutes, and I relieved him and swam for the remaining 30 minutes.  The water going from Harlem into Hudson wasn't near as choppy as my swim.

About halfway down the Hudson the chop picked up and the wind came towards him kicking up the water.  He was enjoying the Hudson about as much as I did.  A bit annoying with the rough conditions.  The water to me tasted the same as when I did it.  Like diluted diesel fuel.  It was a fun experience to relive.

Chad's family was waiting with a huge sign for him at Pier 25 and it was awesome to see.

The entire time I kept Chad's family and friends updated with pictures and video.  It was really neat to see the amount of support he was getting.  He was swimming strong and once he saw the huge cruise ship inside of North Cove he was psyched and knew he only had a few hundred yards left to get back to Pier A to finish.

Chad finished in 9:15:56, and is now noted in the list of Utah Superstar Swims as the 3rd Utahn to swim the Triple Crown.  Way to go Chad, all open water swimmers in Utah are inspired by your dedication and resolve!

See the above video for tons of pics and video of the swim.

Swam by Gords a little before 14:00 No comments:

Sam, Oliver and I prepared this past month to participate in this race.  Oliver on Thursday night was with our family at a wedding reception where there was a group of kids dancing up on a stage.  Well the kids all went up there and did their goofy fortnite dancing.  I wasn't looking cause I was talking with someone in the crows, when Cathi's Mom came up and said, "I think you better come look at Oliver, he fell and he's injured."

Sure enough, he broke his arm two days before his one mile race.  So anyway it was just me and Sam today swimming the 5K while Cathi and Oliver paddled for Sam and Lucy paddled for me.

The water was warm (mid to high 70s), but not so warm that it was detrimental to my performance.  When they started us off I started my watch and swam hard.  I got into a groove and while a couple people passed me within the first mile, I was determined to stay in there and just keep a good maintainable, but quick pace.

At the turnaround point I saw Cathi and Oliver a couple minute back is all and Sam was doing well.  Lucy was in her whitewater kayak and practicing some moves.  I saw her completely upside down at one point and she flipped back over.  She sure loves adventure.  I saw the 1/2 mile buoy from the finish and at this point didn't take a drink and didn't event know what my time was at that point, but I figured I better take something if I wanted a sprint finish. So I yelled out to Lucy, "Drink" and she threw out my water bottle.

Stop was about 20 seconds and I was off.  I wanted to really come in strong.  The entire time on my swim I recognized that the difference in speed for me wasn't stroke rate.  It was about extending my stroke and focusing on two things:

This morning I got a 1:15:07  Chad was right on my tail, shortly followed by Sam. Sam got 1:21:31. Which still was faster than my previous PR.  That kid is going to be awesome over the next few years.  I asked him if he is sore or what, and he wasn't. I'm thinking we totally could have done the 10K. Not at that pace, but it would have been good.  So we have exciting fall/winter training plans.  Next year is going to be great!

What a great day>Thanks to Lucy, Cathi and Oliver as the support crew. And especially to Jim and Connie for always organizing such an awesome race. 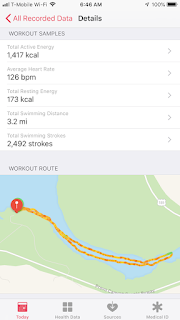 Swam by Gords a little before 09:04 No comments:

Chad Starks, on Saturday August 17th will attempt to swim the 28.5 miles around Manhattan Island.  Up the East River, Harlem River, and then down the Hudson river back to the starting point at the south end of the island.

This will be the final leg in the Triple Crown of Open Water Swimming!  To help him feel of the love and support of all those who want to see him finish this thing, I am organizing a "Guess Chad's time" event.  You can submit how long you think it will take for him to complete this swim, and if you are the closest person, I'll send you via email a $50 giftcard to Swimoutlet.com where you can buy a few goggles or a swimsuit. Whatever you want.

This swim, is my #1 rated most favorite swim of all time!  You can read the details of my own experience of this swim here.

You can submit your words of support and your guess to this form: