In preparation for this race, I was very lucky to be able to contact the wife of Orson Spencer, Phyllis, who told me during our conversation that she is over 100 years old.  She told me that her husband had passed away in 1983.  She said there were newspaper clippings of Orson's record swim which she would try to locate. Here they are!

According to the research that Josh conducted, Orson Spencer set a very respectable record of swimming from the south tip of Antelope Island to Blackrock.  He did it in 1937 at a time of 3:40:52.  That day must have been very favorable for swimming, because that is an extremely fast time for an 8.12 mile swim.  That is a 27:12/mile pace.

Well today that record is broken. 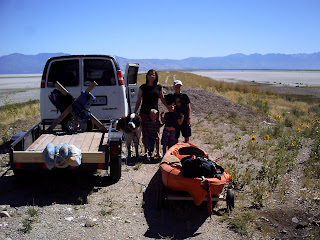 We went to Garr Ranch and hoped to meet up with one of the Antelope Island Rangers.  I had previously arranged with one of them and he was totally on board with it. But he called in sick and must not have informed any one of his colleagues of our arrangement.  But that was OK, cause Cathi, Jacob, Oliver and Sam all enjoyed Garr Ranch.  I was amused at the conversation I had with a volunteer and with the Director at Garr Ranch.  The volunteer told me you can't swim from Antelope to Blackrock anymore.  The director said, "You're going to do what!?"

It's funny/annoying when people get this certain mindset about the lake, that it's just too salty, too shallow to swim in.  It's totally false.  It's definitely shallow until you get deep enough to swim in.  But from my experience, that's anywhere from a 50 - 300 yard wade.  The salt?  My mouth has gotten used to it.  When I first started swimming in the Great Salt Lake earlier this year, I felt like I needed something to drink, or to rinse with, every 20-30 minutes.  But now I'm fine going an hour without a rinse.  Although, today I was really going for speed, and decided against frequent breaks.  Anyway, after about 30 minutes of park staff making calls to get approval for me to make the attempt, they finally opened the gate for Cathi and I to drive down the dirt road to the southern tip. 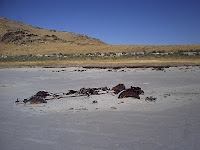 She dropped Jacob and I off where we walked 2.2 miles with the kayak along the beach and across some trails to finally get to the southern tip where we had to walk to the waters edge.  What a long walk!  I was a little tired just doing that walk.  But this was a swim I had been anticipating all week long!  I had carbed up like crazy for this swim.  I wasn't about to let a little hike ruin my day.

The awesome thing about this swim was that we had a pretty good wind from the North the whole way!  It was truly an answer to my prayers.  I really wanted to get a good time and the wind from the north really pushed me right along.  It was sunny all day and the waves were mild, but pushing me the way I was going.  It was perfect!

When we waded through the water until I got up to my waste, I took a temp using my digital therm.  It read 69.8 degrees.  Sweet!  I then took a waypoint on the GPS.  (N 40° 50.019 W112° 11.229).  I pointed Jacob in the right direction and started the swim.  Jacob did a great job staying close to me, and gave me notification at each mile point.  I only stopped for a quick drink of Gatorade every 2 miles.  I looked at my watch on each Mile point and noticed I was hold 23 minute miles.  After reviewing the GPS track data, this is how I did: 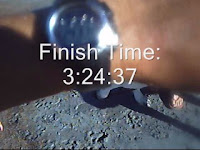 Here's the map of my actual route.

I would never have gotten these times if it weren't for the strong southerly wind!  I was so pleased.  I often thought of Orson Spencer during my swim.  I definitely didn't know the man, but I respectfully thought of his swimming in these waters, and wondered what kind of life he led.  I imagined him right next to me, much like Josh, swimming along side me on this most beautiful day!  That really helped me because I focused the whole time on really strong, yet slow and deliberate pulls.  I had issues with cramps over a dozen times, but I didn't stop, I just gently kicked through those until they went away.  Good thing my legs were already floating so well.  I didn't even need to kick, but in order to get the best possible time, I occasionally did some powerful kicks to get just a few seconds faster on each mile.  I truly pushed this swim.  I felt like my pace was more like a 200 yard race, not an 8 mile race. 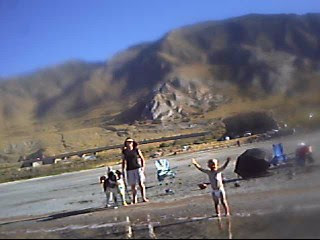 When I got to the mile 7, I kept anticipating seeing the black rock right there in front of me, so I spent too much time trying to sight for it.  The GSL Harbormaster, who was also notified during all the radio communication trying to get me in, came by on his boat at around 7.5 miles and checked up on us.  He said to Jacob, "Almost there!".  When I got to the point where my hand was hitting the bottom on every stroke, I decided to wade in.  I was hitting sharp Tufa reef and would rather walk gently on it than risk scratching my hands or chest on it.  It was still quite a way in, so my last tenth of a mile in to the finish was very slow. Cathi was there with the kids at the end playing at the beach along with their Hatch cousins.  They all had fun.

Today's swim wasn't the longest I've ever done, but one of the most memorable.

Here's my name listed in the International Marathon Swimming Hall of Fame.  Just scroll down until you see records for "Great Salt Lake".

Dude! Nice job! Congrats on an amazing swim and for breaking the record! Bonus points for getting in touch with Orson Spencer's wife!

Very nice Gords. You always find a way to show me that if you have the will you will find a way.

WOW!! Way to go! That is so impressive that you broke a 70+ record! Let us know next time you are swimming locally...we would love to come cheer you on!

Gordon!
You take this swimming to a whole different level. I think I'm pretty brave when I put my face in the water to go under the pool's dividing rope!

Seriously, I'm so thrilled with what determination you have. I want to show more of that in my life's endeavors as well.

Your writeup is very catching. I found my adrenalin increasing as I read along and watched the video. You are awesome. Plus, I think you have a super wife and family to give you support and encouragement. Dad and I, too, would like to be on the shore sometime to cheer you on and/or off. Love, Mom.

Congrats on your International Marathon Swimming Hall of Fame induction! You are famous!

Gordon,
That is awesome. Congratulations on a great accomplishment! I am amazed at your determination in accomplishing goals. Good job!

That is sooooo awesome!! I can't even imagine how incredible it must feel to break a long standing record and become a part of history!! You ROCK!!

Gordon, your'e a freakin animal!! That's all I have to say! Are you still doing tris? Your cuzin Ty did one in Seattle last week.

Congratulations on breaking my Grandfather's record. Thanks for your comments about him and my Grandma, it meant a lot to me. Grandpa's GSL swimming is an important part of our family heritage. I don't doubt that he was cheering you on. I am also a swimmer and I often imagine him there with me as well, especially when I'm in open water. I would love to talk to you sometime about your experience.