This morning I got to sleep in an extra hour cause I was planning to swim at Northwest which opens at 6am vs. SDRC's 5am open time.

The reason I decided on NWRC today was that I was meeting Josh and it was closer for him.  Plus NWRC's pool is typically a little cooler than SDRC, and way less crowded.  There's usually at least 4 empty lanes to choose from in the morning.  I was meeting Josh because he was kind enough to offer to time me for the one hour postal for USMS that needs to be done in the month of January.  I figured since I was already somewhat tapered from last week and still smooth from last week's shave-down I might as well go for it.

Here's my history of one hour postal events:

My goal for today was 4,600 yards.  I was in the pool at 0610 and did 1000 yards warmup.  Felt good and strong.  I also consumed about 450 calories worth of energy bars and gatorade before the swim, so I was energized.  I got a good nights sleep last night so I was ready to go! 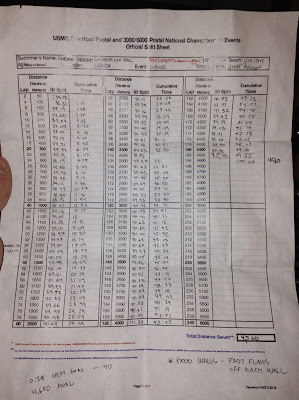 I told Josh that I wanted him to give me a thumbs up or thumbs down depending on if my 50 splits were above or below 39.00 per 50 yards.  For the first 20 laps I got nothing but thumbs up, but on 21 he gave me a thumbs down.  I tried to pick it up, but found myself stuck in the 39 second realm.  Then after about 8 thumbs down in a row I yelled out "40!" telling him that the new standard was thumbs up under 40 seconds.  I got a few thumbs up, but then I started getting thumbs down again!!!!!

When I focused on a strong pull, or a faster stroke rate, or a exceptional turn and streamline off the wall, or breathing on the left side, I would get a thumbs up, but I felt like dying.  I started exactly at 6:30 on the digital clock so I knew where I was at on time.  30 minutes into the swim I honestly felt like stopping and jokingly say, "I'll just double that and call it good."  Yeah right.  Don't we all wish we could give have-assed efforts and just wish we could double it.


Anyway I trudged through see mixed thumbs up and down (mostly down), until about 5 minutes remaining which I really trying with all my might to pour it on, but it was just barely under the 40 second standard.  When I hit the last wall on the flip I saw I had about 5 seconds left while breathing into that turn so I did a strong streamline and 2 strokes and ended up with:

I then talked with Josh, got some feedback and I must admit whined just a little about my performance, but I really should be happy.  It is a new PR that has stood for 3 years.  Plus it's over 150 yards more than I did just two months ago.  So I'll take it gratefully.  I gave it my all, but disappointed that I couldn't hold that 39 second split.  I really need to get some coaching.  I'll hit up Kris for some help and hopefully some actual stress test sets that increase my endurance AND speed.


At 4:30pm I met Jim at GSL Marina and the air temp was great, but the water temp was reading 43°F on Jim's thermometer, but the website said 34.  When we got in, I'm leaning more towards the website.  It was COLD!  I only stayed in for 3:30, while Jim was well beyond double that.
Swam by Gords a little before 09:29