2014 Season wrap up with Deer Creek

Yesterday the Deer Creek Open Water Marathon took place and it was fun.  Even though I wasn't able to swim, I paddled for Sarah while her husband Steve paddled for their daughter, Sophia, who swam the one mile course. 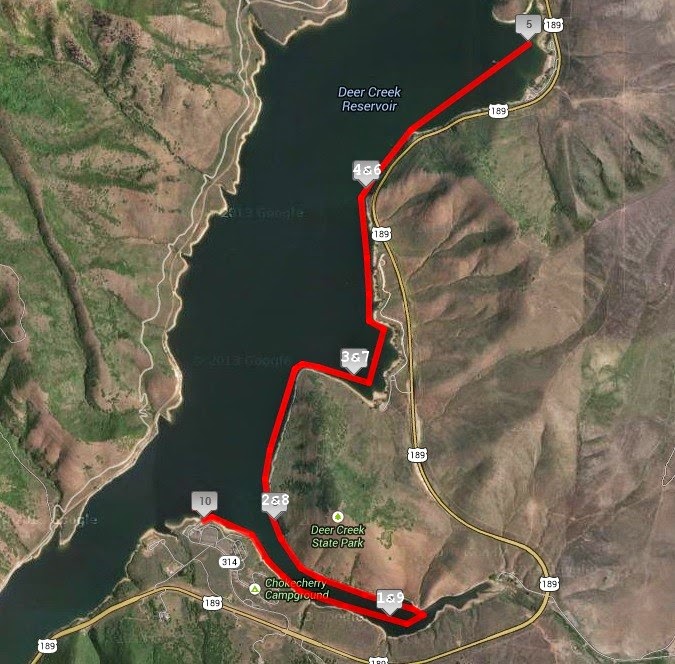 When the 10 mile swimmers began they stayed relatively close together for the first half mile, but then spread out a little.  At that point Sarah was right on my starboard side about 3 feet out.  She did some drafting for a few minutes off various people, but I found that most of the other kayakers were doing a terrible job in guiding their swimmers.  I knew that if I could get her to follow my line closely, that we could swim a shorter path and "swim faster" than those who were having to sight every 5 strokes.
At the end of Wallsburg bay she moved into 5th position.  Once she got around that buoy she quickly moved into 3rd position.  Then by the time we got to the mouth of Wallsburg bay again, she was only 25 yards behind Lisa and George.  By the time we got about 2.5 miles into the race she had passed Lisa and George and was continuing to lengthen that lead.  When I told her at mile 2 at her first feed she could win this thing, she splashed me and didn't believe me.  I told her I was serious and that if she maintained this pace she would definitely win it.  They were slowing down and she was speeding up.  Their kayakers were all over the place and I noticed they both were sighting frequently.  Sarah didn't sight more than a couple times the entire time I was with her.

I was expecting Steve to catch me around mile 2, but he was no where to be seen so I stayed right with her.  I'd occassionally give her a sign of "You're doing really well", but holding a fist up.  I'd give her a two minute warning before her 30 minute feeds which went really fast.  They were about 30 seconds or so. She'd drink and go.

When we got to the 5K turnaround buoy at the Rainbow bay she was doing very well.  We made it all the way to the 4.25 miles into it when Steve paddled up behind me.  I told him she was due for a feed in one minute and that if she kept going at this pace she would win.

At this point I had to go to the bathroom really bad.  The whole experience made me much more appreciative of Tom Reilly and Terry O'Malley my paddlers for Catalina and MIMS.  That sure is a long way to paddle and I was only paddling for 3 hours.  They both did way more than that.

Today was a special day for me as it's my "Channelversary".  What a dream it was two years ago when I was able to tour Dover and England having just swum the channel!  I'm excited to go back and experience that all over again as a coach for Chad.  Here's a video that still gives me chills!

It's my ultimate goal to share that experience with him.  At yesterday's race he had an incident where a kayaker got too close to him and he ended up breaking and dislocating a couple fingers on his hand.  That was about a mile into the race so he swam the remaining portion in terrible pain, but he finished!  I can only imagine the frustration, disappointment and worry he must have gone through during the race.
He is taking a couple days off to let the swelling go down and to heal, but he is very determined to continue his training and get his qualifier done in September.  I'm praying for him that it heals quickly.  Fortunately you don't have a ton of pressure on your fingers so the strain on them should be relatively small.  It's a significant amount of pressure if they're in pain I'm sure, but once they've even partially healed, it should be just a matter of keeping that pain under control.

I'm so proud of my two close swimming friends Sarah and Chad for their performances on Saturday.  There were 5 swimmers total this year that swam the Utah Triple Crown during race day.  Pretty impressive!

Swam by Gords a little before 11:02 No comments:

Paying the price for pushing 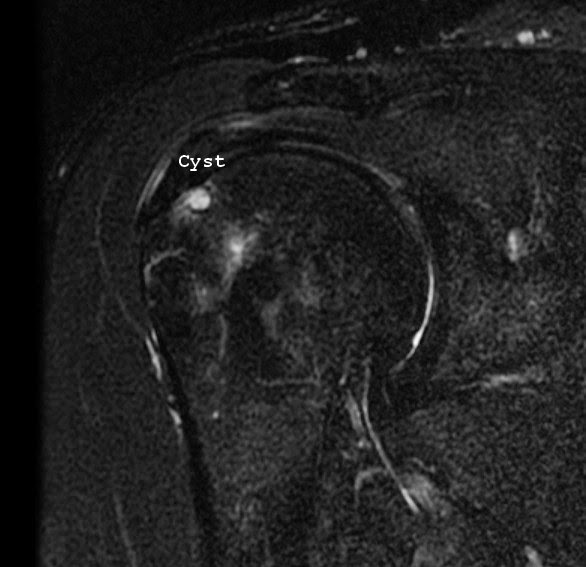 Shoulder pain continues.  Went to see my surgeon this morning with the MRI images and he told me of three issues.  He said I have arthritis and tendonitis in my shoulder.  First off, I'm wearing down the tendons around the AC joint, instead of cartilage, there is none, it's bone rubbing bone which is the source of the pain.  He said it can be fixed fairly easily and without much impact on my training.  It's like a 4-5 week recover is all.  You cut down the bone and it fills in with scar tissue.  That part alone isn't a big deal.

But he noticed a couple things, a cyst near where my rotator cuff attaches to the bone.  There was a good amount of liquid in the tendon and in the bone around that cyst meaning that its been irritating that joint and its inflamed.  The amount of tendon that attaches to the bone concerned him.  Instead of it attaching along the full length, it was only attached at a fraction of the length, which implies there could be a partial rotator cuff tear there. 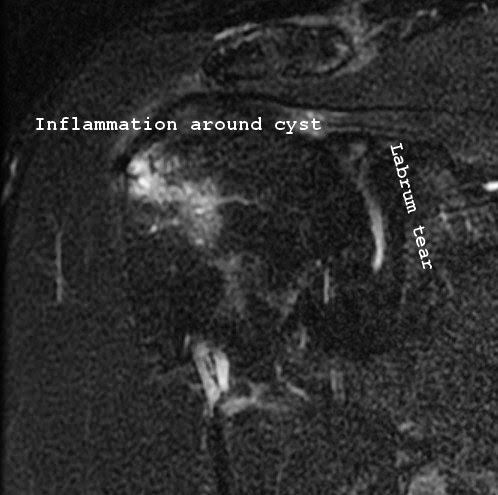 He seemed more concerned about another image which meant there could be a partial Labrum tear going into my bicep.  It would mean going in under my armpit, severing my bicep tendon and reattaching it to my bone instead of my shoulder.

There was a lot of information to take in and I hope I got it all right. He gave me several options like doing one surgery for the AC joint, or additionally having him go in with a scope and get a good look at things at the time of the AC joint surgery to see how bad it is and fix it.

It's got me thinking about my future and where I really want to go with this.  Do I want to keep pushing my body with training 8-10K yards a day several times a week in preparation for a ultra marathon swim?  I worry when I see my mother who doesn't have full range of motion in her shoulder due to her body breaking down and having surgery, but never back to full range.  If I get this surgery now, do I risk needing another surgical procedure later on, cause I've "worn out" that fix?  Do I take this as a sign to move on to a different sport?  My shoulder still needs some rest.  I tried swimming with it a little this morning while working with the kids.  Still pretty painful.  Makes me really sad.

I mentioned this idea to Dr. Gardiner and he said that there wasn't anything that required surgery for day to day functionality, but that if I wanted to train for big swims, that it would be a good idea to proceed.  So I'm leaning towards letting it all just rest and move on, then reassess in a year.  It's like I'm closing a chapter in my life that has brought me so much joy and purpose.  I have to be happy and extremely satisfied with what I've accomplished.  I know there are other activities I enjoy that will keep me young and fit.

I'll still be involved in coaching and participating in my friends adventures, but as for me training superhuman distances and planning long swims, that is postponed for at least a year.
Swam by Gords a little before 09:46 No comments:

Jonas does it! One mile straight swimming

After Isaac's successful open water swim at the swim camp, Jonas has been getting ribbed pretty good from Isaac about his aborting the swim.  So Jonas has been desperate to prove himself to Isaac, and probably himself.  So today Jonas swam 36 laps continuously in the pool while I gave the younger two a swim lesson.  Cathi sat there at the end of the lane to make sure the count on his laps was correct.

He did it and I was so proud as I saw him really sprint that last lap. He still had ton left in the tank.  What a proud moment for me to see that kid make it.  Cool thing is he now gets his Mile Swim patch for scouts.  Probably the youngest scout to get it in our troop.