My in-laws gave me the best birthday present ever.  I told Cathi about a month ago about the Swimmer Buddy I saw in Swimmer Magazine.  Which is basically a commercialized version of Rob D's Frankenfish.  I dreamed of super quick feeds, and a very cool way to take video while swimming that didn't involve strapping the GoPro to my noggin.

Well my sweet in-laws got this for my birthday, (which we celebrated last week, but isn't until later this month). I was so happy!  This afternoon I met Goody out at Antelope Island Marina and this was the maiden voyage.  My initial impression with it was fantastic.  Sure it has slightly more drag than a SSD (Which has gone through too many names), but it allows me to put my stuff in a waterproof container and get easy access to it.  I put my GPS in there, my car keys, a couple cereal bars and an extra pair of goggles.  Then I strapped the GPS to the front of the noodle that goes across the top.

It took fantastic pics and video, although with any picture I take, the media just seems to never capture the true roughness of the water. 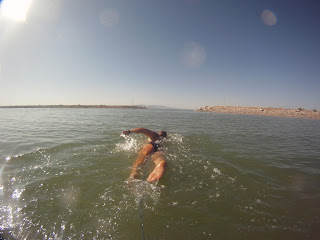 When we got in Goody took a temp and he read 55f?  It definitely did not feel that cold.  But it felt much colder than Tuesday's swim.  Once we swam for 30 minutes, I stopped took a quick feed and was ready to go in less than 30 seconds.  It was awesome.  No fumbling with opening the SSD, just reached under the netting for my drink, pulled it out and bam!  Goody was only behind me about 20 yards, and while he got his drink I took a temp with my watch - 66.2f.  I also remembered how my expensive GPS unit died last year right before the GSLOW race due to prolonged exposure to water, so I put the GPS which I had dangling from the noodle in my waterproof container.

The wind was coming from the northwest and we were heading right into it.  The drag wasn't terribly annoying and I liked how the tether to my belt wasn't on a sliding contraption.  That was one of the biggest peeves I had with the SSD.  It would slide to one side and I had to make a quick adjustment while swimming to get it centered.  However, with the Swimmer buddy, the line goes back past my feet and sometimes when I'd kick during my rotation, my feet would feel the line.  So it prevented me from really kicking hard to avoid wrapping my feet around the cord.  Not a huge deal, especially in the GSL when I normally hardly kick at all. 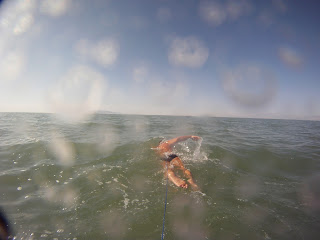 At each 30 minute interval we'd stop for a quick feed.  After going for 1:20 northwest towards Fremont Island, we turned around and headed back.  This time we were going with the wind and the waves.  It went much faster this time.  The USA flag which I had posted at the back of my Swimmer Buddy occasionally acted like a sail and at the top of a really big wave would cause the thing to flip.  I had attached my waterproof container to the netting system with a keychain so I knew that would get separated, and when I flipped it back over both the drink and the container were still held within the bungee netting.  Goody was entertained with the flipping.  As the wind continued to grow and the waves getting more dramatic, the flipping was happening more frequently too.  With my drink nearly gone there was hardly any weight on the thing so Goody attached his SSD belt to the back of the noodle and let it drag behind to weigh it down.  That helped, but it flipped one more time going back and I realized that the wet flag was really causing the problem with the wind, so I quickly pulled it out and slid it under the netting.  No more flipping after that.  I took another reading on the way back and it read 64f.

When we got back to the marina, with the lack of waves we both really poured it on for a sprint to the finish.  It was a good day and the GPS read 4.15 miles at the end.  We were greeted by a motorcycle guy who asked us a few questions.  He must have thought we were nuts, both of us swimming that far in the waves, and walking up the ramp spitting in vain to get that salty taste out of our mouths.

Goody opened up his SSD and found that his phone which he had in two ziplock bags had taken on water, and it was dead.  I told him about the rice immersion trick which worked for me a couple times before with wet electronics.  Crossing my fingers for him that it works.

Even though it was about a mile short of what I wanted, I was pleased with today's swim.  It felt more English Channel like with the cooler temp, and the crazy waves and wind.  Not a bad afternoon.

Haha! That makes more sense. Yeah, sorry, those earplugs make life for everyone else except for me, annoying. Sorry

Hi Gords. You mentioned that before you got the Swimmer Buddy, you were using the SSD for towing your feeds. How were you able to open the dry bag when you were swimming? How long did that take? Does opening the dry bag deflate the buoy?

In the GSL it wasn't that big of a deal. I didn't even have to tread. But in freshwater I would open it up while floating on my back and quickly grabbing my drink, dropping it and letting it float while I closed it back up to avoid getting water in it. Getting my drink, then opening it and putting it back in. Time consuming, and also took more energy than I wanted. (About a minute). The dry bag does NOT deflate when it's opened. So I never inflated it too full capacity because it puts some pressure on the inside contents and made for an awkward extraction of the drink.

My biggest grief with the Swimmer Buddy is that it takes up my entire back seat of my car (I don't remove the fin) so I have to plan ahead when I need more passengers in the car, and removing the fin takes a few minutes, but also allows it to take up less room.

But with the SSD I can quickly deflate it and throw it in my trunk.