I paddled for McKenzie Thomsen, a 20 year old girl from Salt Lake and this was her first open water swim.  She was fully neoprened up.  Booties and all.  No way she was gonna get hypothermia on this swim, that's for sure.  Water temp was 72.

When we started about 2 minutes into the swim she stopped and said, "I'm panicking!"  I told her to make sure to exhale completely and slow her breathing down.  Which she immediately did.  After that not a single stop or complaint the entire swim.  She got into a rhythm and just kept it going, like the energizer bunny.

She asked to have me stop her every mile for a feed, which she had supplied.  It was 2 little power chews and that's it. She didn't pack any liquids at all.  Her first feed at one mile was at a little over 35 minutes.  I saw that she was treading water while eating and I advised her to roll over on her back so she could chew and conserve energy as well as maintain a forward progress to the other side.  I had my GPS so I had a close eye on her distance and pace.  Her stroke rate was about 61 spm the entire way.

At her 3rd feed (at just under 2 hours), I told her she needed to drink at least half a bottle of gatorade.  I explained that muscles are 70% water, and they need water to be able to process properly.  She didn't give me a fight and downed the first half.  She said, "A mile sure seems longer here than it does in the pool."  True that.

We kept on going and her pace seemed to be constant.  She was bilateral breathing the entire time which itself is extremely impressive.  I only saw her sight maybe twice the entire time.  She trusted me enough to guide her directly to the finish. I began to see the big red arch just after mile two.  I was using the mountains as a guide to get to the location I was estimating the red arch to be which was pretty close. 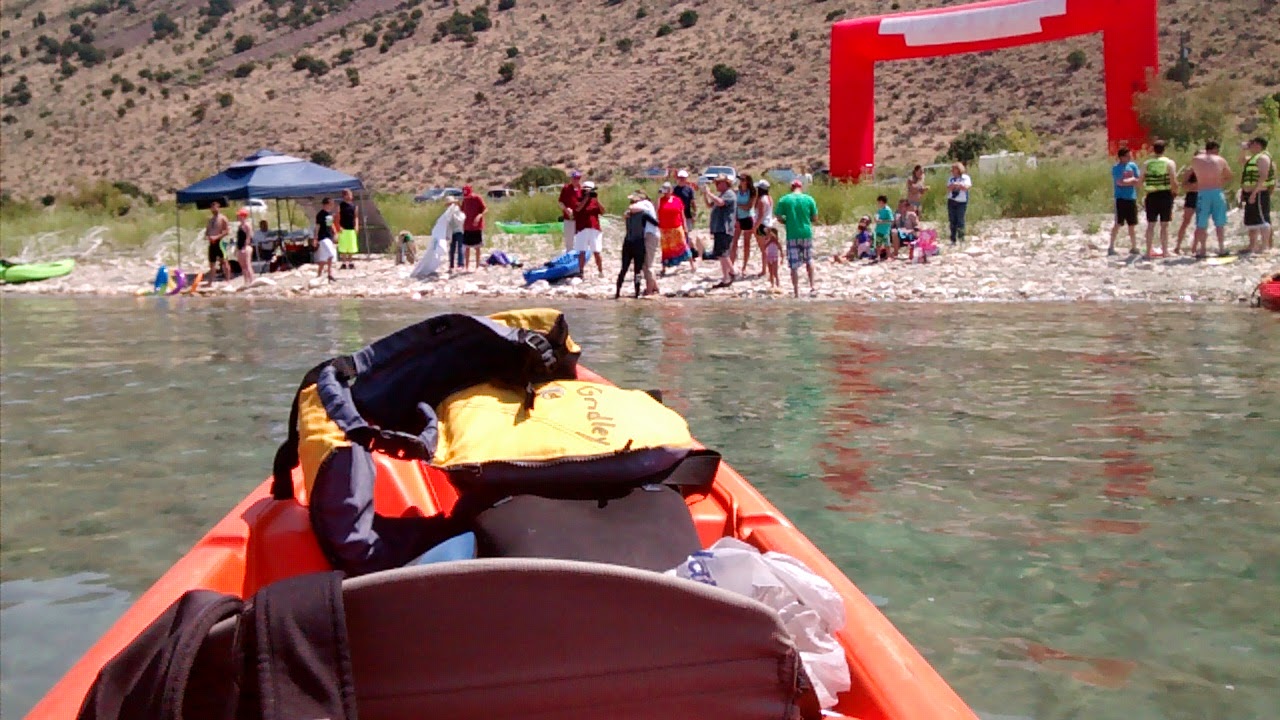 I forgot to put on sunscreen so my shins and arms got a little burned, not visibly though.  They weren't red, but last night I felt them a little sensitive.

When we got to the finish her family was there with a huge sign and tons of family members there to cheer for her getting out of the water.  What an awesome support system she had.  Her mother was a little nervous and asked me to really keep a close eye on her.  She did just fine.  Like she was a pro.  Not a word of complaint, and no stopping.  She did awesome.

As for the entire race, there were a few issues, but a majority of the people made it across and there were no emergency issues to deal with.  Chad was a great help out on the water monitoring the swimmers and pulling those that needed.  A success I thought.  We did have issues with shirts.  We didn't have enough for everyone since we had a lot of last minute registrants.

I also had a conversation with a swimmer that bothered me, so I wrote up this article to address it.