I have been training for this moment for months!  I have had a little countdown timer on my home page that I saw everyday.  It did a countdown back when it was like 180 days left.  It kept it constantly on my mind everyday as a goal that I needed to continue to train and work towards.  It was exciting seeing it get down to a handful of days left.

Watching the weather over the weekend I was frustrated as I saw that there was a forecasted storm on Monday, so I opted for Tuesday.  However it also accompanied strong winds from the south.  So my plan to swim from White Rock to Black Rock changed the other way and we started at Black Rock and swam north to take advantage of the forecasted wind. I also wanted to do this swim hoping that it would set a standard as a serious marathon swim in the GSL with channel like difficulty.  I challenge anyone to do this swim.

Little did I know, the wind played a very minor role in the swim.   The waves going north were only noticeable for about one mile of the swim.

Anyhow I arrived at Black Rock with Jacob, Austin, Cathi, Sam and Oliver.  We got the boat in the water, applied sunscreen, channel grease, and Josh and Sabrina arrived to wish us well.  What nice friends! 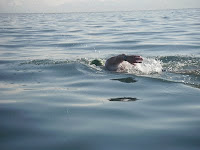 When I got in it felt cool, but not unbearable.  I was guessing it was about 60°.  After I waded out about 150-200 yards or so I was up to my waist and asked Jacob to take a temp reading with the digital thermometer.  It read 58.4°F  I was surprised.  From here I stopped wading and began the swim.

Here are the complete stats and info, mile by mile, which I had Jacob keep track of at every feeding (which was mileage based and not time based):

In several areas on the lake are these rivers of  Brine Shrimp Eggs (which I've lovingly called in the past "Brine Shrimp Poo")  It's not the funnest stuff to swim in.  They are anywhere from 1-6 inches in deep right on the surface.  When I swim through those I can feel that it absorbs alot of heat from the sun as the water temp right at the surface is warm.  But below that it is much colder!  Colder than if it wasn't there.  It's like it absorbs the heat from the sun and doesn't allow ANY heat below it.

Around Mile 7 my lips and tongue were pretty swollen and I kept thinking "So if I end up swimming 3 times further than this, is my tongue going to be 3 times as swollen?"  If that were the case my tongue would be as big as a hot water bottle, and my lips would be massive and I'd entertain everyone saying "Bubba Gump Shrimp".  Fortunately, they didn't get worse than they did at Mile 7.

Also, right at noon when the sun was highest in the sky, at that time the water was clear and I really loved looking down in the clear water and seeing the sun's rays delve way down into the depths of the lake.  It was so beautiful!  I really should have taken a picture.

Once I got to Mile 10 I realized I only had a few minutes before hitting the six hour standard for  qualifying for the English Channel.  The rules for qualifying are simple:  Swim for at least 6 hours or longer in 61°F Water (or colder).  Secondary Objective Complete!  Now to finish the main objective!  Swim the full 20+ mile route.

I could really feel the water pulling me at mile  16-17.  Like I was swimming downstream.  It was great!  When I got to mile 19 I saw what I thought was White Rock.  It wasn't  It was the corner before that.  I was a little bummed knowing that I had another couple miles to go.  It was tough at the end.  I just wanted to be done.  But I kept going!    Jacob and Austin were on the radio with Cathi chatting it up and laughing.  They were going way up ahead and then I'd yell at them and they'd wait for me to catch up.

About half the time Austin was asleep or chillin' in the back of the boat.  During the time when the wind and waves were helping me out, I noticed while I was breathing, that Austin woke up from a long nap.  He lifted up the hat that covered his face, and turned around to dig through the bag.  He put on a sweatshirt cause he was a little cold, and then put a towel over his legs and went back to sleep.  That had me laughing underwater.  Here I am in sub 60 degree water for hours, and a little wind blowing in 70° air temp is giving the poor boy goose bumps!

The hardest parts of the swim was the cold, and the shoulder strain the last half of the swim.  I prayed before, and several times during the swim, as well as afterwards.  I believe I was blessed with the strength and determination to finish, despite the long exposure to the sub 60 degree temp.  I definitely haven't been very consistent on cold water acclimation, and that was my biggest worry.  I often envisioned a trio of legends swimming next to me in the lake:  Ed Watson, Ken Lyman and Orson Spencer.

As far as strength and endurance, I never hit a "wall" where I didn't have any energy.  The only two problems were the cold and the shoulder which I didn't let stop me.

At the White Rock beach, Cathi and all the kids were there.  Josh and Sabrina were there too with their kids.  I was 59 minutes beyond my projected finish.  Not too bad though.  Carting the boat and all our gear to the car was a pain!  It was heavy, and the axle that I built last year just doesn't work well on wet sand.  So we had to carry all our stuff probably 3/4 mile or so to the car.  Josh was a stud helping me get that carried there.  What a true friend!

As of this moment my shoulders are stiff.  I think I'll take a few days off and let them heal.  Here's video and pics:

Here's all the pictures and raw video:
It is also my hope that by swimming this distance in the Great Salt Lake will prove to the world, that the Great Salt Lake is just as wonderful to swim in as other lakes.  Sure it's salty, and has huge rivers of brown brine shrimp eggs, but those two characteristics shouldn't prevent swimmers from enjoying the many other beautiful characteristics of the lake.
Also something of note.  This nearly doubles my longest OW swim.  Sweet!  How's that for breaking a PR?
Swam by Gords a little before 09:34
Labels: Orson Spencer

Dude! You did it! I knew you would do it. Your stroke looks awesome on the video and you look really strong. I couldn't belive how much energy you still had at the end...I would have collapsed on the beach.

I'm glad you got some pictures and video of the "brine poo"...that will discourage people from trying to break your record :)

I have a bunch of pictures and a couple videos that I will get you copies of.

Congrats again! I'm glad we could be there to see you.

Congrats on the awesome swim Gords!!!

Those brine shrimp poo pockets look pretty gross... not sure how excited I am to swim through any of those!

Gords, congrats on the epic swim! Your stroke looked strong in the video. But that brine shrimp poo looks nasty.

Amazing swim! Congratulations on such a big accomplishment.

Gord, I'm so proud of you! What an accomplishment! I wish I would have known about it, I would have loved to try to be there. You are awesome and a true inspiration.

Correction: I checked with the GSL Harbormaster. That brown stuff: Brine Shrimp Eggs. Not Poo. Still not the funnest stuff to swim in.

Congratulations! I love the mile-by-mile report--good info plus entertaining. How do you eat a Hostess pie in the water?

Brine shrimp *eggs* is a way better marketing slogan for the GSL than brine shrimp poo. Maybe roe would be even better ;)

On that last feeding it was shallow enough for me to stand up. So I took that one standing. I've never had a better tasting pie. That was the best feeding ever!

Good job, Gordon! That is an amazing feat. So many people are amazed when I tell them what my brother does and is planning to do. You're awesome.

Congrats Gords! You are ready for the EC now! I loved the swim log and your notes on feedings. Are you sponsored by Hostess? It gives your swimmers an idea of what to expect in a few days. I hope all of those Sea Monkeys hatch by then!

You are amazing!! You make us proud!!

HOLY COW, Gordon! That accomplishment is so amazing! I really enjoyed reading about it. Mile Marker 15 notes were quite funny-gross. Yeah, you really should see if you can get a sponsorship from Hostess! Extraordinary job! What a feeling of accomplishment you must feel! You have 2 great kids for your support crew!
DD

Wow, quite a feat! I am working on a book on Great Salt Lake right now.

If you train again out on the lake I would love to come and photograph you.

Please let me know if you do!