Finally the anticipated day has come!

All the swimmers arrived at the Marina and we had our briefing.  I gave them some quick details about the race and it's history.  I knew that probably all of them had read up on it on the website so it was a very abbreviated version.  We had three vans to transport the swimmers to the Island.  I should have gotten one more, so people could stretch their legs out.  It was a long 2 hour ride to the boats. 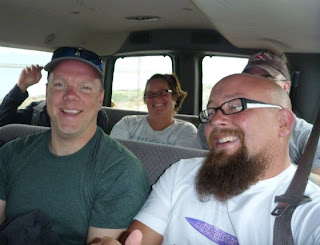 In my van was Goody, Rob, Suzie, Sylvia, Greg and John.  Sylvia's boater had a misunderstanding with the meeting time and was nowhere to be found.  Suzie said that she and Sylvia swim together all the time and are about the same pace and that they could just share Suzie's support boat.  I was scrambling.  I didn't know what to do.  I wasn't concerned that there would be an incident out on the water.  I was concerned because according to the USMS OW handbook, and under the guidelines of getting USMS sanctioning we are REQUIRED to have every swimmer have their own safety craft for this marathon swim event. 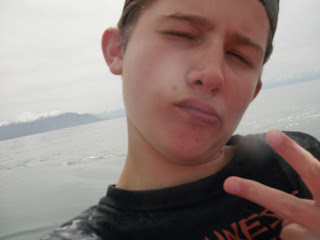 On the way to the island I realized that we had Sylvia's boat on the island and now we had to find a way to get it back.  Then a thought popped into my head!  My oldest son Austin, my wonderful 15 year old boy was home sleeping in his bed.  He is a very experienced kayak support!  Fortunately I live really close to the island causeway and could pick him up on the way.  I called him on my cell.  Lucy placed the phone right next to his ear next to his drooling face on the pillow.  "Hellllllo?"  In a very strong and directing voice I answered, "Austin!  I really need your help son.  I need you to wake up NOW, and get ready to paddle from Antelope to Black Rock."  "What!?"  "You heard me.  I need you to get up right now!  You'll even get paid for your time boy!" (Which I don't do when he paddles for me.  Just give him some pizza or something lame like that).  "I'll be there in 15 minutes.  Be ready for me on the front lawn when I drive up".  "Geez!  OK!" he said.  Austin definitely wears his feelings on his sleeve for all to see.  He was not happy.  He had his cute pouty face on when we drove up.  Everyone in the van was laughing when they saw him.  Here was my mini-me teenager being forced into submission on a Saturday when he'd rather stay home and sleep and play video games.  Good thing for him Sylvia is a hoot.  I loved her frivolity and I'm sure it made his day alot better. 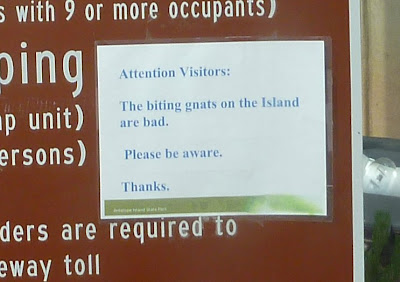 When we arrived at the causeway the swimmers saw the overhyped electric sign as well as well as this temporary sign on the brown welcome sign about biting gnats and mosquitos.  It was funny to see their reactions to it.  Granted there are large swarms out there.  But how bad it really is depends on WHERE on the island you are.  We made our way to Garr Ranch and had our last potty break.  It was a LONG ride for everyone.  We took the very bumpy dirt road south of Garr Ranch to the end of the road.  There was Chris Haramoto with a small party of others taking pictures and watching the 11 swimmers rush out of the vans, and quickly apply their lube to their trouble spots.  Many of the observers were wearing bug nets over their heads.  Nice!  Way to freak the hell out of the swimmers.  I wasn't even wearing bug spray and I think I got bit once by a mosquito. 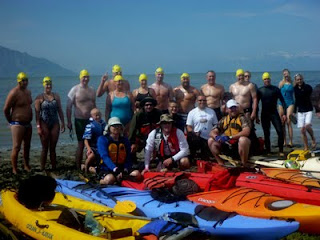 Rob showed my all the dead bugs that had tried biting him on his lubed up shoulders.  Haha.  Great idea, just smear lube all over your entire body and you don't even need to worry about bugs at all!  We took some pictures of the swimmers and their support crews.  Then finally got all the boats in the water and I told them all that we would be walking quite a ways to get to a point where we could swim.  I pointed them to a couple of landmarks way off on the Oquirrh Mountains where Black Rock was.  Fortunately I had paid attention on the way back the day before to find those huge landmarks in relation to Black Rock, and it was spot on. 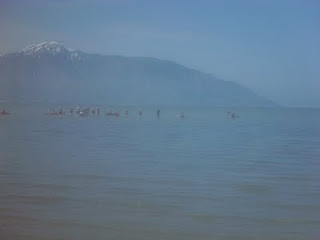 They walked for a good half mile or more to just above waist level for some of them.  I realized that I had left Rob's two camera with Chris for taking pictures.  That would have been a HUGE Fail #3 but I told the group to keep walking and left my boat with Jacob while I RAN as fast as I could back to the waters edge to retrieve the cameras.  Then I ran back.

I made it back to the boat and Jacob and I paddled like crazy to catch up.  Fortunately the underwater beach was still flat and they were now just barely up to their waist.  There were some really tall guys in the group, John and Greg.  I knew they were all ready to go and they had to start sometime.  I had my loud lifeguard whistle with me and the timers were on shore, but they were ants on the horizon.  I used my watch which I had synchronized with Josh the night before.  We would start at 10:46 am exactly.  We counted down all together from 15 and I sounded the whistle.  Everyone was in and salt water for the first time in 70 years was being churned up by nearly a dozen swimmers heading south from Antelope Island! 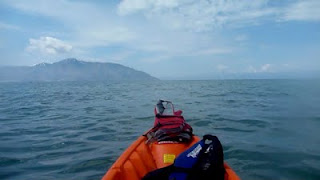 I took a few more pictures and caught back up with Rob.  He is mostly a right side breather and he told me he likes his support at 1 or 2 o'clock.  This was my first time being a support paddler.  It was tough!  I often caught myself drifting into never ever land in my brain and realized that I was about 20 feet ahead of him at his 12.  Ooops.  Focus Gords!  You can drift mentally when you swim, but the support has to focus on the swimmer!

I was really impressed with Rob's stroke.  Looks so effortless and smooth!  The wind and waves unfortunately were NOT like they were the day before.  They were coming from the southwest and hitting the swimmers at 2 o'clock.  After about 2 hours it shifted a little to the swimmers 4 o'clock.  Will Reeves and John took off right from the start and they were off to our right a little.  Joe and Jason were ahead of us a little and off to our left.  I knew Will, Greg and Joe would be big contenders, but I was especially surprised by Jason.  I knew he swam in High School and that he was a big time waterpolo dude.  He admitted that he and Christine had never swam in open water before.  I was like what?  You two should have signed up for the one mile!  But they both did very well!  I was especially impressed that their first open water swim was this race.  Jason might have won it had he trained.  He told me after the race, he swam maybe 1000 yards total in preparation and training for this race.  Unbelievable!

With the wind hitting me from my right and really pushing me into Rob I ended up just paddling on my left and doing a J stroke to keep centered on my landmark right above Black Rock.  Rob took his feedings every 25 minutes and I was focused on getting those timed just the way he wanted.  Near the end one of the sail boats was motoring its way to the marina and passed right in front of us.  I don't mind when the boaters pass a few hundred yards away, but this guy wasn't budging from his course and passed about 30 yards in front of us.  Geez guy.  Thanks!  Not a dangerous situation, but a little too close for comfort. 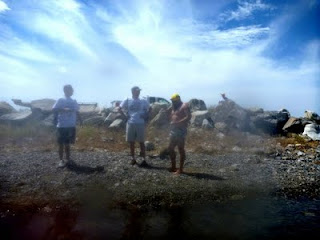 I got a call on my cell phone several times during the race and I was notified when Will finished first, then Greg, and then from Stephy who headed up the lifeguards for the one mile.   Also from Cathi who was just coming back from her own race.  She ran the Utah Valley Marathon this morning and was coming out to cheer for the finishers.  When Rob and I stopped for the last feeding I told him he was very close to beating Joe and Jason.  He picked it up, but their line was right .along the shore and I think the current is stronger there in pushing them towards Black Rock.  We ended up coming in just a couple minutes after them.

Goody was right behind us for the first couple miles, but Rob pulled away and ended up taking 5th with a time of 4:23:54  With the water level being this high the point to point distance from where we actually started to swim and the water's edge at Black Rock according to the GPS waypoints came in at 8.34 miles.  A little longer than my swim last year.  Here are the official results:

All the racers stuck around for some post race pics and interviews.  They all seemed tired, but thrilled at having completed the adventure together and I absolutely LOVED watching the interaction that was going on among everyone.  Family supporters and observers were mingling with the swimmers and everyone was happy.  That was the icing on the cake.  The swim itself was something I had envisioned.  But I didn't envision the level of comradery that was evident!
Clean up was time consuming but finally got it.  My Brother in law Brendon was gracious in helping us get the buoys out with his canoes.  I still have a few last things to follow up on, but its nearly 100% done.

I am SO grateful that it turned out this well.  There were alot of volunteers who really made the race a success!  I was so grateful that the weather turned out the way it did.  The entire field of 11 finished and that itself is a small miracle.  In the old days people were pulled out of this race left and right!  I was so happy to have met the swimmers and get to know them a little bit.  I'm already excited for next year's event!
Swam by Gords a little before 21:57

You and Josh organized a great swim race. I really liked how laid-back it all was. Thank Jacob again for me. He did a great job.

Thanks Greg. Jacob said, "Dad, Greg is way faster than you." I was impressed he was able to keep up. Nice job! Good luck next week at MIMS! I'd love to do that event. One day...