Swam the width of Bear Lake

We got up at 6:30 and I had some oatmeal for breakfast. Got in the van, drove to the Utah State Parks Marina a mile north of Garden City. Dropped off the boat and some guy with his fancy ski boat asked Cathi, "Are you going out in that!?" We said yes. He said, "I wouldn't". The wind is bad and the swells are like 5 feet tall (as he holds his hand up to his chin). Cathi got real nervous. "Really?" He continued scaring her while I finished loading up the boat and tied it to the dock. Once we were settled we left Jacob there with the boat so he could keep and eye on it while Cathi and I drove over to the east side where we left the Van. I marked the spot on the GPS and set the navigation on the GPS to take us to that point. Drove back in the bug, and we saw another couple guys loading up their boat that was probably half our size.

Cathi remembering the warning of the guy from earlier said, "Are you guys going out in that?" Oh my gosh! Cathi gets so easily freaked out. She told them about the man who said "I guarantee you will tip over if you go out in that". The winds had settled down a little, but it was still pretty good waves. We all got in and slowly made our way outside the protective shell of the marina. I finished getting balm on my shoulders and my goggles on. We started just outside the marina where I jumped out and started swimming. The water was cold, but it didn't feel below 60. 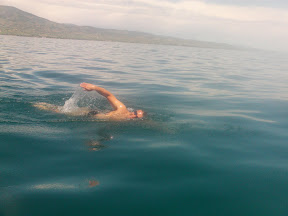 Here are the stats of the swim, including details.

I was worried about the temp and it was unfounded. 65 was the average temp and that was very nice. If I did the length, I couldn't have counted it anyway as a qualifying swim. So it was fortunate that I did the width so I can get an idea of what to do next time. Next time, I'm definitely doing the length. Cause the waves would push me the whole way. I wasn't going directly into them and they weren't terrible. In order to get that swim to be a qualifier though I want to ensure that the temp is colder than it was today. So I'll probably have to wait until mid to late September. I'll have to keep a close eye on the temps for the rest of the year and put a plan together on when to do it.
Here's a map of the actual swim:


The water was clear and clean. It was nice not having to gag when I end up swallowing a bit of water.

Boy did I get a burn on my upper legs, just below my speedo. Whats up with that! I have swam out at Bountiful just as long or longer than today's swim, and I never got a burn like that on the back of my legs. My theory is that the Bear Lake water is so clear that the UV can get
my legs, whereas Bountiful is so murky that it can't get to my legs.

It was a very rewarding swim and click the image below for a quick video. 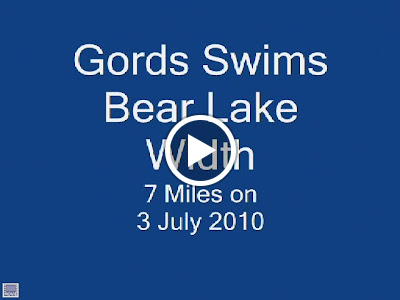