In my English Channel Crossing training, I've realized that swimming in freshwater is one thing, but swimming in salty water is another.  Swimming in the Great Salt Lake is an extreme saltwater swimming experience.  Don't let the fact that it's a lake lessen your impression that it isn't oftentimes violent with waves like the ocean.  There have been Fremont Island Visitors who were in grave danger boating there.  When bad weather comes in, it can be very dangerous.But not the case with my swim...When I started out Friday morning we immediately had trouble with the trolling motor, so we hurried and packed everything back up and went to boat #2, the Pelican tandem Kayak.  Jacob was OK to paddle that far.  So we hurried back and started off.  The water was smooth as glass.  The DNR deputy followed us to the ramp and did a boat check and was a nice guy.  We passed on everything. We started off at 11:56 am.  The water felt comfortable and not overly hot, even though it came in at 83 degrees.  It took 3:19 to go 6.7 miles including feedings so I met the 2 mph threshold.  We landed and immediately set up camp.We did a lot of exploring and found that the island is covered (at least where ever there is sagebrush) with humongous spiders.  Here's the video summary of our trip 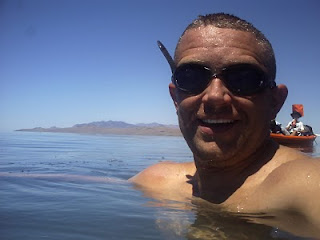 The next morning we got up, had breakfast, broke camp, and loaded up the boat to swim home.  Left at 8:40am.  I noticed that about 3 miles from Antelope there were some big black rocks below the surface about 8 feet down.  Similar to the rocks on the beach at Fremont.  Look like igneous rocks.  The water was pretty clear and didn't see much brine shrimp.  But at 2 miles from Antelope, it got more cloudy with brine shrimp and the tiny brine flies got thick.  Gets really nasty the closer you get to Antelope.  Finished really strong and was pushing it hard.  Felt great!  Never had any issues with my shoulders or back.  Probably because I was so streamlined and my feet hardly had to kick at all.  Didn't even have to tread water at feeding breaks.  My lips and tongue sure took a beating!

We left a geocache on the Island.
Update - 3/15/2021 - I placed this geocache BEFORE ffsl started the geocache rule, so I'm leaving it put.  If you want the coordinates, let me know, otherwise happy hunting.

Fremont Island has a rich history.  It was first documented as being explored by John C. Fremont and Kit Carson in 1843, who afterward named it "Disappointment Island".  Carson was so bored that he chiseled a cross in a rock there.  It has also been called Castle Island because of the shape of the island as well as Miller's Island because of Dan Miller who put 153 head of sheep there in 1859.  The official name is Fremont Island.

Fremont Island has been the home to permanent residents, outcasted graverobber, and sheep ranchers. Has been recently visited by kayakers, ham radio users, scouts, photographers, airplane pilots, and now a swimmer. Because you can't drive to Fremont Island, it remains a "frontier" that not many people enjoy, even with thousands of local outdoor enthusiasts within a half-hour from it.   It's quite possible the word just isn't out about how neat the Island is and what an adventure it is to visit.  Hopefully, its mystery can be enjoyed by more people.  If you do decide to visit Fremont Island, do the world a favor and share your pictures and write about your visit online.

Fremont Island is NOT owned by the State like Antelope.  It is private land.  I got permission from the leaser of the island.  You need special permission to go out there.  Also, it's actually can be pretty dangerous if you're not prepared to deal with the elements.

David McLean contacted me on Facebook, and he found the geocache just stumbling on it.  The geocaching community denied my listing it as it was on private land at the time that I submitted it.  With DNR FFSL owning it, I'll leave the geocache location a mystery, and leave it as is, since it's technically against their rules.  But given that I placed it before they had ownership, it should remain as part of Fremont Island history.

Looks like you guys had a great time! I especially like the part of the video where you show your shriveled tongue and lips. I can't believe that even with rinsing your mouth that it got that bad.

Dang Gordon, that is SO AWESOME. What a cool adventure! It makes me want to do some exploring in the great salt lake. Thanks for the post!