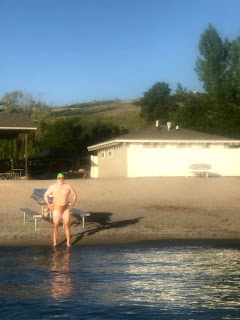 This morning Cathi and I loaded up the Seadoo and got to the Bear Lake Marina at 6:30. This time I remembered the grease (which also included zinc oxide). Got greased up and left the shore just after 7:15am.

The prep for today’s swim included several things which I hoped would improve my time:

The water recorded on the Seadoo came up as 68 degrees and the water felt great!

The first hour I was feeling sluggish and intentionally went a little slower so I could pace myself. After the second feed, I picked it up. 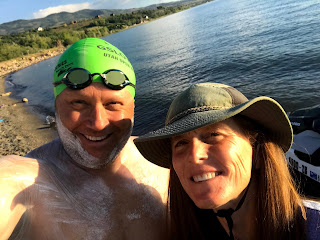 Cathi was the perfect support and pilot. I had Cisco beach navigation enabled on the Garmin and it was keeping her in line along to get straight to cisco beach and constantly reported the estimated time of arrival. She was so upbeat and cheerful. The feeds went much faster and were shorter than last time.

The downside to the swim was that I misplaced my goggle box in the packing for the trip, and left it at home. I was nearing panic as I searched for placing it could be in the car. Fortunately I had an extra pair in my glove box and an extra set of ear plugs in my wallet. Problem was that these goggles were pretty old and fogged  up constantly. I could barely make out her profile from 10 feet away. But it worked out. I just kept the sun to my 11 o’clock as it came up over the mountain.

At my 6th feed she said that I was on target for a sub 4 hour swim if I kept it up! That was 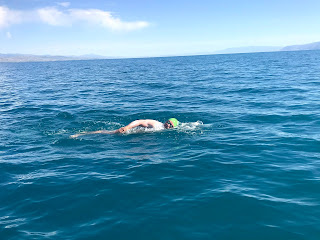 encouraging and I made sure to really keep my stroke count high and reaching forward to maximize each and every stroke. I've seen some swims where the swimmer in their fatigue robs themselves of several inches per stroke due to lack of extension, and proper hand entry.  Multiply thousands of stroke by several inches and that adds up to a slower swim, which equates to more time in the water, and increasing that fatigue even more.

I made sure not to look forward until I saw rocks underneath me. Meaning I was only 50 feet away. When I got to the point where I could stand, I made sure to just keep crawling as far as I could. Then I only had two feet of rocks to navigate to get to dry ground. As soon as I cleared the water I stopped my watch and it read 3:45:07.

So excited with that time. That’s very reassuring to get a time that is about 40 minutes faster than last time. 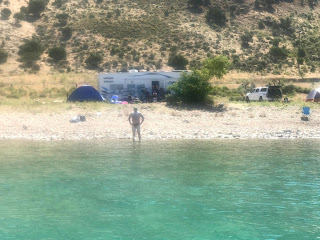 The official race was today.  My shoulders are feeling awesome.  It's such a confidence boost to swim hard and finish strong and still have energy to have kept going.  Deer Creek race 10 mile should be a good next step.

There were about 8-10 people registered (including relay teams) for today's 10k. It was really good conditions, and everyone finished without incident.  Jim joined Chad on his boat along with Mark. It was so fun being out on the water on the Seadoo.  Had a ton of fun.