Sam, Cathi and I drove to the Bear Lake Marina just north of Garden city, and got prepared for our 7:30am departure.  I had reached out to Gustavo a month earlier informing him of my intention to do the crossing on Labor Day with Sam. He agreed to do an attempt as well that day.  He wanted to get his Utah Triple Crown this year and the Bear Lake swim this year involved some weather conditions that required pulling some swimmers.
So today's swim was another change at getting that UTC for him.  He had a couple of kayakers join him for safety. There was a concern that there would be a huge number of boaters out on the lake.  I knew we'd be OK starting early and getting to the east side earlier in the day.  (I've done three major swims in Bear Lake on Labor Day).

We started at 7:33am and the water felt awesome.  Sam and I got a great pace going and Cathi was doing well as our kayaker.  Sam and I swam side by side with Cathi on the outside.

At the first feed I was in good spirits and asked Sam to toast our first drink together out on the lake.  I tried to make this a fun event for Sam and Cathi and yelled out at the end of our feed "On to the nipple!"  Referencing the peak that we often point swimmers to on the east side that gets them close to the position they need to aim for.  Once they get halfway, there is some adjustments to the landscape references for the finish at Cisco Beach Campground entrance. 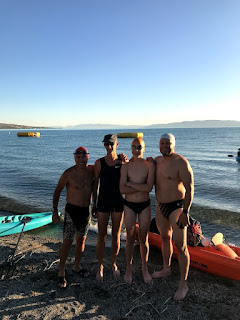 The water the first half wasn't terrible, but it wasn't glassy.  Once we got in the middle of the lake and beyond, the water was almost glassy with how smooth it was.  At the 3rd feed I told Sam, next time we take a feed we'll be more than halfway.

The feeds we took today consisted of the following: 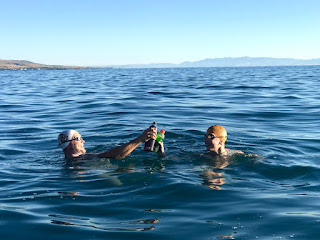 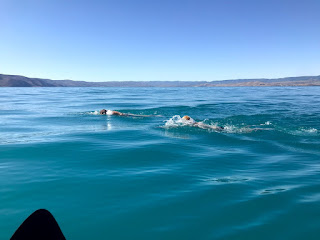 Once we got the 4th feed I noticed Sam having a harder time to stay right at my 9 o clock. I told him he needed to eat more peaches and get some energy in his body.  But each 30 minute session after that progressively got slower for him and I could see him shivering a little during our feed breaks.  The 7th feed he cramped up pretty good and I asked him to relax the muscle and stretch it.  Once that feed was over, I think he was really angry and he took off!  I had a hard time keeping up with him.  After about 5 minutes he slowed back down, and continued his slower pace.  He was getting tired, but fortunately we were about a mile from shore.  Cathi took some video of the finish:

Sam was pretty beat and shivering. Isaac carried him to the car to warm up.  I got dressed and helped load the kayak onto the trailer.  Once we got all loaded up and ready to go, Gustavo completed his crossing. He completed it in 4:24.

We took a minute and took some pictures and finished out mid-day with everyone in smiles.

I'm so proud of that kid.  As far as I can tell from the results of the swims of width crossings, Sam is the youngest person to do it (14 years 2 months 9 days)

Next year we're shooting for an Anacapa crossing.