Yesterday I witnessed an amazing thing.  Chad swam the length of Bear Lake.  That's a 19 mile freshwater swim at an elevation of 5,924 feet above sea level folks!

Chad picked me up on Wednesday night and we drove straight up to the marina.  The crew consisted of myself, Sue Frehse, Sarah Jones and Chad's wife Chandra.

We got the boat loaded up and had a crew conference where Chad discussed his plan including feeds, direction of swim (which we decided at the time of arrival and referring to the weather forecast for the next 14 hours).  We discussed the roles every had and safety.  We then tied the kayak to the back of his boat and motored to the north end.  We went towards lights that we thought were the marina, but once we got close the lights disappeared.  They were on the other side of the north road which was confusing.  We slowed down and saw the shoreline was covered with reeds and difficult to get to.

I turned on my handheld GPS and I could see Goody's track from a couple weeks earlier.  The marina was a couple miles east of us.  So we started heading east.  But no lights.  What happened.  Once we got close to where we should be based on the GPS Sarah turned on a flashlight and BAM!  The marina wall was right there!  If we had gone a few seconds further we would have ran right into it.  There were no lights whatsoever near the marina, no buoy lights, not even the lights along the ramp were on.  Very dangerous situation.  Good thing we slowed down when we did.  Idaho State parks really needs to think about how safe it is to not have a single light on in that area.

Here are my transcribed notes: 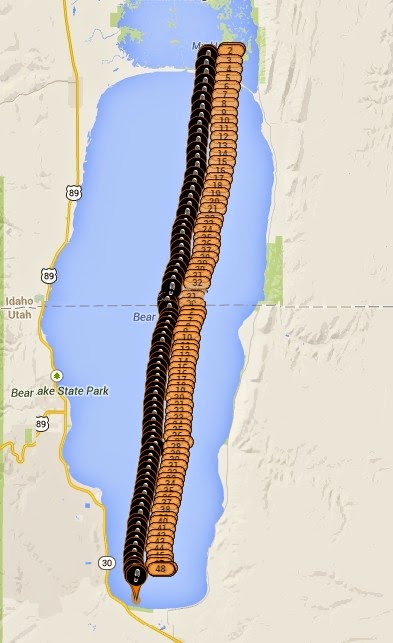 I'm so proud of Chad and how he was able to power through this.  I could tell he was tired, yet he persisted and not once complained.  Chad is the sixth person to have ever swam the length of Bear Lake!  Pretty neat accomplishment.

I had a great time crewing on this swim and although mother nature didn't help us out with a 61 degree temperature, she sure was kind in the relatively smooth conditions, until the end.  Those winds at the end were simply unreal!  I thought of the prayer that Chad asked Sarah to offer at the start.  Today's conditions were truly an appreciated answer to that prayer.  The winds the last mile were an eye opener to me of how it could have been.  Had it been like that starting half way into the swim, I don't think it would have been possible to finish.  It was amazing enough that he pushed through that last mile.  So proud of that guy!

Here's a few pics and video I took.


Some things to work on:
He does have some stroke techinique that'll we need to work through to help with his lower back pain.  He needs to drive his head a little lower to get a more streamlined position, and we need to work on bilateral breathing.  The goal on a long swim like this should be at least 34 minute miles.  Why? Because in order to hit Cap Griz Nes in a tide cycle that lasts 6 hours, a 12 hour swim is ideal.  Unless your Trent Grimsey and can swim it just under 6 hours.

The English Channel from the shortest distance (Cap Griz Nes to the coast in Dover), is 21 miles.  If you're able to swim the English Channel in 12 hours, you're averaging 34 minute miles (including time wasted at feeds).  The more you deviate from that 34 minute mile average, the more you're gonna miss the cap which means a longer swim, because of the contours of the French coast.  I'm sure I'm over simplifying it, but regardless a 34 minute mile is something that is definitely achievable especially in good conditions.