I feel honored, proud, and very privileged to have witnessed something this evening.  A very historical moment.

This afternoon Goody messaged me that he starts chemo therapy on Monday and that he wanted one last swim before then.  After that starts he would probably not feel up to swimming.  This would be his farewell swim for the moment.

I drove out to the marina and met him and Josh out there.  My plan was to swim one lap and one lap only.  I've had it with those 15+  minute swims that take more time in recovery than actually swimming.  I told Goody,  "I know I won't be in the water as long as you guys, so I'll hurry back and get busy snapping pictures."  He responded.  "Well I'll see how it goes after one lap, but I'd like to do at least two". 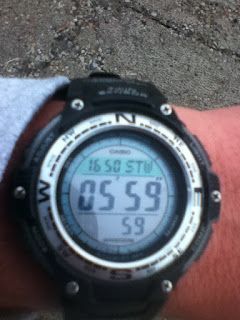 When we started I kicked off my stop watch.  I swam a little harder this time than I did a couple days ago.  When I got out the watch read 6:02 and I wanted to get under 6 minutes this time.  When I got to the turnaround point I didn't dilly dally.  I got back to swimming towards the boat ramp.  I passed Josh and Goody still heading west.  When I got to the boat ramp, I just kept swimming until my fingertips hit the bottom of the ramp.  I took a quick temp reading with my watch:  41 degrees.  I stood up as fast as I could and jumped out.  Stopped the clock!  5:59.59  Whew!  That was close!

Shoulder felt fine and I was glad to towel off and act as photographer for the other guys.  A few minutes later than finished their first lap and turned around and wen't back out!  Those guys are amazing!

Then when they finished their second lap, Goody asked if he extended the third lap to a buoy that is about 50 yards out from the marina opening, if that third lap extension would total to one mile.  I yelled out, "I really don't think so, but I've never measured that before."  He yelled out asking me to walk along the marina wall with him.  He was going for a mile.  I was in awe.  I snapped more pictures and kept a close eye on his stroke.  It looked strong.  A couple time he stopped real quick to adjust his goggles and clear the water out. 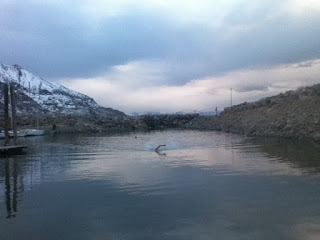 Josh was right with him on the first two, and then got out.  I witnessed the second two laps from dry ground.  Still shaking from my one puny "little boy lap".  Dave Shearer, the Harbormaster for the marina was in his huge metal rescue boat and came in from being out on the lake.  He witnessed Goody's third lap and half of his last lap, before heading to the office.  Josh was at the boat ramp with some tourists who happened to come to the marina.  I yelled for Josh to see if he could go get his car heated up and ready for Goody when he got out.

I was throwing out thumbs up signs on his last lap.  I couldn't believe he was doing this!  I was trying to think about what his thought processes were.  Being in the water this long is risking his life. Does he desire this ice mile so bad that he accepts and almost welcomes the fact that it could kill him? I mean, less than a month ago, two duck hunters were out on the lake when their boat took on water and they both died from exposure to the cold.  Based on the conversation we had about 30 minutes later in the shower, I wasn't far off.  Jumping ahead to recovery in the shower, Goody told us he had already signed papers with the hospital that waived them should he actually die during all the surgeries and chemo treatments.  He told us, "so I said, Why not go for it and if I die, at least I do it doing something I love".

Back to the fourth lap heading back to the ramp, I kept cheering for him and figured he was already in the water well over 35 minutes.  I stopped my watch when I got out, so I don't personally know what his final time was, but I'm estimating that it was around 40 minutes.  The last minute of the final lap I ran back to the boat ramp to be there ready for him with his towel and help him dry off and get dressed as quickly as possible.

We helped him get from sitting on the dock to the car which was very toasty at this point.  He sat and went through the recovery stage while we monitored him.  I took his pulse and it took a while for me to locate it due to all the shivering muscle fibers in his neck.  It was at a normal rate and continued to keep an eye on him.  He was moaning in pain.  But that is normal even for a moderate distance that I rarely put myself through.

He took a couple sips of warm water and asked for hot shower.  Josh said, "Warm?  I thought you were done with those?"  We all laughed and eventually got him in that shower.  The shower is in a little room and we helped him get seated with that warm water streaming into him.  He told us his thought process.  As he poured out his heart and emotions that he has been going through with his cancer, I was nearly brought to tears.  I could only imagine what he has gone through and is about to go through.

After about 20 minutes in that shower, he started to celebrate and joke around and I could see his white cold feet turn red again.  He was warming up and the hypothermia recovery was a success.  Josh and I were so happy for him.  This is the best Christmas present he could ever give himself.  A major success like this to ponder on over the next several months while he fights the cancer which will take every ounce of life to beat it.  I thought to myself, if he can take each treatment as well as he does each lap leading up to an ice mile, he's going to make it look easy.  Although I know that it actually won't be easy and nothing I can say will make it any easier.  I've never been there.  I don't have a clue.  I can only be there for the man. 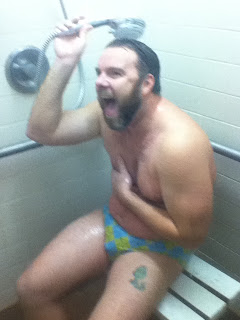 I'm so proud of what he was able to do this evening!  I can't begin to express how honored I am to know such a fighter.  There are over 1800 English Channel swimmers, but only handfuls of real Ice Swimmers.  He is in an extremely rare club!  He challenged Josh and I to follow suit.  Man!  He's got the wheels turning in my head.  The fear of that kind of pain exceeds any kind of pain from a marathon swim.  Hypothermia is definitely something to NEVER take lightly.  Physiologically, you can get to a point where you really can't be reheated, and then it's all over.  Or you may get out, but the super cold blood from your extremities get to your heart and you have a heart attack.  This kind of a challenge I'm going to have to train for, but I cherish my warm, hot showers too much at this point.

Goody wrote up his experience and includes what got him motivated to DO THIS!

Great post! Thinking of trying to do an ice mile myself next year so love reading about others experiences. Do you think you will go for it?

Definitely not going for it this season. I won't rule it out for down the road, but I've got other goals in my scope at the moment.