This morning I got up with Austin and Jonas at the cabin and we drove to Garden City, to the Utah State Marina where we got there just as the gates opened at 6am.  I got the boys setup on the two man kayak and had them meet me at the end of the marina.

The water was flat as glass and the temp was warmer than I had hoped.  (73°F).  Felt a little stiff at the start, but was fine by 30 minutes into it.  Once when I was breathing to the right I saw my camera case slip into the water and Jonas tried to grab it, but it was too late.  He yelled out "Austin!" who was in the back and Austin too tried to grab it out of the water but was too late.  I quickly swam over and threw the case up out of the water at Austin and he quickly got it out of the case and started to dry it off.  He turned it on, and it seemed to work.  Whew!! 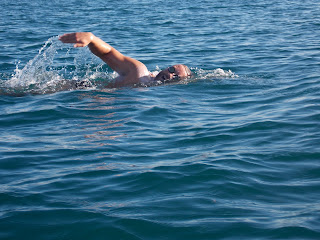 I had to take 200 mg ibuprofen about 4 miles into it, and again at about 7 miles into it.  But after that I was totally good.  My left shoulder before those points was giving me a little trouble.  Not with grinding, just with a little annoying tightness in my shoulder muscle.  Not a joint thing, a muscle thing.

When we got to the other side, I noted that the time was 3:43:24.  I let the boys get out, stretch their legs, and we noticed that all the rocks on the beach were very rounded and flat, so we spent a few minutes doing some rock skipping.  I also filled up on some chicken nuggets (a craving that I noticed at the end of my last swim at Bear Lake).  Then I got back in and started the swim back.  I didn't stop the clock, but just kept it going.  The swim back was stronger and faster than the swim during the first crossing. 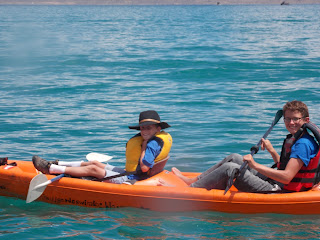 Jonas napped about half the time on the way back while Austin paddled.  Austin forgot sunscreen and today was extremely sunny.  Sure enough he is pretty red right now.  It was quite a bit choppy coming back, but not too bad.

There were alot of sailboats heading east away from the Marina, so I stuck close to Austin and Jonas as we got close to them.  I was eager to finish, but was very happy that my shoulders were feeling strong, I didn't have any aches, and actually when I got out, I asked Austin if he felt up to doing one more length, jokingly of course.  He said "No, I'm done".

English Channel rules were followed: no touching the boat, only one suit, goggles, ear plugs.  I didn't wear a cap.  The water was 73!  Cleared the water completely on both sides before stopping the clock.

Sweet!! I've got your new records up here: http://www.bearlakeswimmingassociation.com/crossings-records

Wow, Gords. Nicely done. I am thoroughly impressed every time Josh reports another one of your accomplishments. Keep it up! Good luck in The Swim!