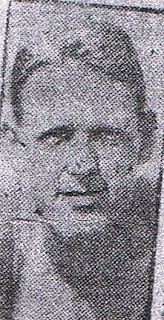 I received a treasure in the mail today!  Orson Spencer's grand-daughter sent me several newspaper articles as well as some personal journal entries from Orson's mother.  Here is the letter she sent me:

I appreciate your interest in my father and his swimming accomplishments, as well as the Great Salt Lake Swimming events. I apologize for being so slow at getting this information to you.

I have copied a few of the articles we had in his personal history and typed an entry from his mother about his swimming that might be interesting. If I come across any more, I'll forward them on to you. I understand that many of Utah's newspapers are now online and can be viewed and copied. I found a list of many articles from the Ogden Standard Examiner. A list of dates of those articles is as follows:

Entry written by his mother Hazel V. Spencer in his history:

"On July 20, 1941, Orson won a two mile race at Pine View lake (fresh water), Ogden. We were so thrilled to see him beat five of Utah's best swimmers so soon after breaking his arm. Then Aug 3, 1941, on his mother's birthday he won the race from Antelope Island to Blackrock. It was a terrible day, be he battled the high waves alone, when all other swimmers quit, just because he had promised his mother he would win. The man who followed him in the boat looked like he was made of salt; and he said, 'It would take one better than a fish to swim the lake today.'"

As to the reason the race stopped, my mother agrees with the Harbormaster of the GSL, that it was because of the war.

I was thrilled to see your blog on your swim and your mentioning my father, as well as seeing his name with yours on the International Marathon Swimming Hall of Fame record. Thanks for your interest and efforts in bringing back the Antelope to Blackrock Race.

Here are the many newspaper articles that she sent me which I have scanned and typed up below....

He negotiated the 8 miles of turbulent brine in 4 hours and 12 minutes to finish far ahead of Ken Lyman whose second place time was 4 hours and 36 minutes. The time was 22 minutes slower than his record of 3 hours and 40 minutes last year.

Crowd Cheers
Lyman matched Spencer stroke for stroke half way, but thereafter fell steadily behind. The winner received an ovation from a large crosed assembled at Black Rock Beach to witness the finish.

Will Receive Trophies
The Black Rock Beach Company will present tropies to all who finished the race. George Knepp, deputy sheriff, supervised boating the swimmers. The race was supervised by Dr. Munn Q. Cannon, chairman of the Intermountain A.A.U. swimming committee which annually promotes the swim.

Conditions Worst in History of Race

At the start of the annual Antelope Island-Black Rock Beach swim yesterday, Orson Spencer was just a convalescing ex-champion whose complete recovery from injuries received in an automobile accident was so doubtful as to make his part in competition a distinct question mark.

When the 8.12 mile swim - through the worst conditions encountered in the history of the race - was over, Orson was not only the winner, but the iron man of the gruelling swim, so completely recovered that his strength and stamina was notably ahead of anyone else's and his position in local swimming circles restored.

Swimming the course through mountainous waves that often kept the contestants out of touch with their boats, Orson required five hours, seven hours and 22 seconds - an hour and one-half slower than his own record for the course - but could have taken twice as long and still won, for he was the only man in a starting field of six who finished.

At the start of the race, the water was calm and the going smooth, but it was not long before a heavy wind came up to whip the surface into mountainous waves and made the going both difficult and perilous. Ned Winder of Granger was the first to drop out of the race, and shortly afterwards Ed Watson, who won the race two years ago under highly adverse weather conditions, was taken sick and he had to be hauled into his boat.

Key Lyman, defending champion, was battling with Spencer for the lead in the race, but when the waves got bigger and bigger he gave up the attempt, leaving Spencer, Peter Leavitt and Wayne Christensen in the water. Leavitt was the next to be taken out of the turbulent water, sick and shortly afterwards Christensen swallowed a mouthful of brine and was all through, leaving Spencer in the water alone with nearly two miles to go.

Officials urged Orson to call it off and accept a "victory by elimination" but the swimmer kept grimly on under his own power until he reached the finish line unaided.

"It's Mother's birthday, and she's my trainer and coach: I have to giver her a real win for a birthday present." he said when urged to quit the swim before the end of the course.

It was Spencer's sixth win of the gruelling race. He holds both the three-hour-40-minute-52-second record for the present course, set in 1937, and the record for the old Antelope Island to Saltair course, two hours and two minutes.

Great Salt Lake is a unique body of water - and distance swimming in it is a unique sport. 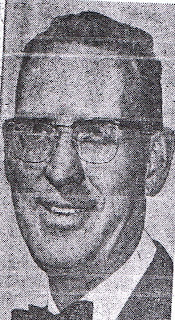 And if you're going to enter this season's Antelope Island-to-Saltair swim, you'd better start with the fundamentals-such as breathing.

That's the advce for this season's candidates from Orson D. Spencer, the greatest distance swimmer the Intermountain Area has produced, and one of the best in the sprints as well.

Spencer's career is almost a unique one, from his 1919 memories of the first "race" over the course by veteran instructor C. S. "Prof" Leaf, to Orson's final appearance in 1941 freshwater swim at Pineview Dam.

Prospective entrants for the July 23 race this season would do well to listen to the six-time winner of the Antelope classic, whose still-perfect condition, carries him through a program with the Wasatch Mountain Club, and plenty of skiing activity at Alta in the winter.

The swimmer in the Great Salt Lake is of a different breed.

Because a mouth full of salt brings a definite choking sensation; and two or three mouthfuls take away all sensation, in short order.

And the stroke also is governed by the waves - the freestyle goes over the wave, so that the splash is back of the face, away from the eyes and mouth. Goggles are good only for a short time, beacuse they get covered with salt.

Spencer also learned that most of the work is done with the arms - the legs are so high because of the buoyancy that they are kicked only to maintain circulation.

Stories of Spencer's remarkable condition are legend, but perhaps the two best are these:

THE FIRST, concerns the time when, at 15 years of age, Orson hiked from Saltair north and then along the shoreline to Antelope Island, a distance of about 10 miles, and then swam the five miles back that afternoon and evening - all by himself. Orson wants this story to be forgotten, for it violates every rule of safety he has stressed for so many years since, such as requiring an accompanying boat for every swimer.

The other story concerns the time, a few year later, when he and Paul Swain rowed over to the island in 2 hours and 30 minutes - and Orson swam back in exactly the same time, that afternoon.

Orson sounds like a must for the Intermountain Area's sports hall of fame.

Orson Spencer, in his day good enough to represent Utah in the nationals in the backstroke, couldn't make the prep traveling squad today, unless he shaved 10 seconds off his best time. 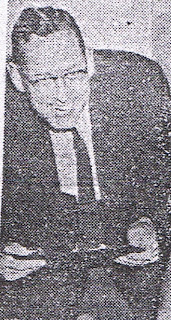 As a star swimmer for LDS High and the University of Utah, Spencer dominated the local scene for almost two decades and at the age of 32, he finally called it quits. Under today's stepped up swim program, Spencer would be a rarity because of his longevity, but his records would have to improve to merit consideration.

"I swam the backstroke in 1:07 and went to the nationals, where the event was won in 1:07.4" Orson laughed as he visited the Ute workout.

"Now, the high school record for the distance is 54.5 seconds."

There's a reason for this tremendous youth surge in swimming, and Orson is the first to admit it.

"Coach Don Reddish has his Ute swimmers going a mile in the morning, two miles in the afternoon and winding up with 1 1/2 hours of calisthenics in the afternoon. When we were swimming, we were lucky to get in two swims a day, total of maybe a half mile" Orson added.

The age factor is a difference now.

"When I was 15, I wanted to enter the Great Salt Lake swim to Antelope Island, but my dad believed I was too young and I was 20 before I had the chance," Spencer continued.

What a pioneer he was! I am truly blessed to have been able to contact his family who had these wonderful records to share. I truly hope that his love for the sport, and his successes can be appreciated by fellow Utah swimmers and that the Great Salt Lake gets more attention like it once did as a highly respectable open water swimming challenge and adventure.
Swam by Gords a little before 22:50
Labels: Great Salt Lake History, Orson Spencer

Great job contacting Orson's family and getting these articles! What an inspirational swimmer! His advice about swimming in rough water is still valid today.

You know what would be cool? If we had a special "Orson Spencer Award" at our swim next year. It could go to the fastest swimmer or maybe the most inspirational.

Now I am curious about the race at Pineview that some of the articles mentioned...