Met Josh at Black rock at 6:20am this morning and we walked to the beach right there and about 75 feet into the water where it was finally deep enough to swim.  I towed a watertight container with my GPS, small gatorade and some mouthwash.  After analyzing the GPS track data of where we actually started to swim and where we ended, it came to 5K in 1:28.  Here's the map:


It sure didn't seem like we were gone very long.  Probably because it was so fun!  The wind/waves were going pretty well to the Northeast so going out was easy, but coming back we were going right into the waves.  Could have gone much faster, but this was just a relaxing swim and not a tough workout.  My shoulder didn't have any issues at all, so I'm fully back to normal there.  Whew! 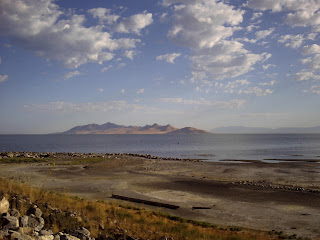 After we got back to our cars we went over to the Marina to meet with the marina harbormaster, Dave Shearer, but he wasn't there so we'll catch up with him later.  The Black Rock thru the reef channel to the end of the buoys would be a perfect course because there are two beaches with easy access:
1) The beach at Black Rock
2) The beach at the Marina
and then there is the outlook at the end of the marina.  It really is an ideal location!  The water is much clearer on the south end of the lake versus north of Antelope Island.  The tufa rock is about 3 feet from the surface for the first half mile or so at the beginning of the swim, but that's no big deal.  After that it gets about 6-10 feet deep.  The thing about this swim is that you wouldn't want a bunch of novice kayakers and canoers out there on race day.  If the wind picks up just a little like it did today, it would be very difficult for the boaters to control their vessels.

Oh did I not post this yet?  I already registered the domain:  greatsaltlakeopenwater.com and am in the very early planning stages for setting up a race just like Deer Creek (1 mile,  5K, 10K and 10 mile) events.  Hoping to schedule it for early-mid June.  I have alot of planning and coordinating to pull it off right.  The web site will have a skeleton in the next couple days.
Swam by Gords a little before 09:47
Labels: GSL Swimming